By CHINONSO OKOABU 5 months ago 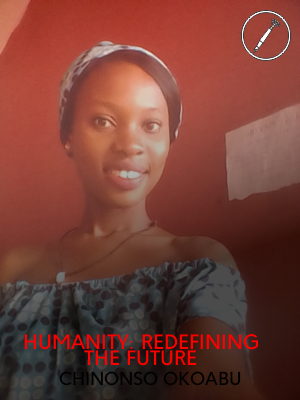 Everything in this world was created for a purpose. And so humans created in the image and likeness of God was also for a purpose. But are we fulfilling the purpose of God for us? According to Catholic teachings, God made us to know him, to love him, to serve him and to be happy with him in the next world. How do we love God? We love him by love shown to our neighbours. How do we serve him? By service rendered to humanity.

Humanity according to Wikipedia is a virtue associated with basic ethics of altruism derived from the human condition. It goes further to state that it differs from mere justice in that there is a level of altruism towards the individual included in humanity more so than the fairness found in justice. That is, humanity and the acts of love, altruism and social intelligence are typically individual's strength while fairness is generally expanded to all. Humanity is humans exhibiting humane qualities making them different from other creatures created by God. Humanity is expressed in kindness towards our fellow man, value for their lives and service rendered to them.

But in the world today, it is very obvious that the essence of humanity is gradually losing its allure. And that can be traced back to when sin started with Adam and Eve. Human lives are no longer valued. The recent happenings around us bring this to light as seen in the xenophobic attack on Nigerians by South Africans, the killings in our country and even within families, brothers are against brothers. These show us how far we have gone in shedding our glory. Humanity is gradually losing that which defines it. The very cloth in which it is adorned has been traded for a rag. We choose to hate our brothers instead of loving them as Christ has commanded us. But is all hope lost? The future can still be redefined.

The future is not something yet unseen, but that which is before us. The future starts now. If what is before us is not made better, a better tomorrow cannot be guaranteed for our children and youths.

Redefining means giving a new meaning to something. It also means seeing something in a new light. And how can we redefine the future?

The future is bleak, but it can be made brighter. There is still hope for humanity to come out of the darkness it has plunged itself into. The future would be given a better meaning if humanity begins to live out its name. The future will bask in a new glory if humanity begins to exhibit its qualities. Goodwill outdo evil, our children yet unborn in the womb will leap for joy when they perceive what is before them, we will no longer live estranged in fear but guided in oneness, the poor will eat on the same table with the rich, lions and man will dwell together. This is possible if man understands humanity and lives it out.

There are strengths of humanity which include:

Kindnesses: This encompasses feelings of altruism, generosity and general desire to help people.

Social intelligence: The character strength and virtue (CSV) psychology assessment, defines social intelligence as the ability to understand people and relate with them. This encompasses tolerance and a great deal of patience. Working with one another can prove difficult, for we come from different cultural and religious backgrounds. But the quality of humanity in us will make us patient and understanding and that is what makes us different from other animals.

Humility: This is the act of being humble. This enables us serve our fellow man

The most outstanding of these strengths is love. The whole purpose of creation was borne out of love. When man was separated from God, it was out of love God redeemed him through Christ. God is love as the Bible says and so Christianity was birthed out of love. We cannot love the God we do not see if we do not love our neighbours. There is no religion that does not preach love. Edhi says: 'No religion is higher than humanity'. And Thomas Aquinas included humanity as part of the 'seven heavenly virtues'. It is love that enables us exhibits the other strength of humanity. With love will be kind to others, it is only one who loves who will be willing to understand others. A pregnant woman who posses the sense of humanity will not commit abortion or abandon a baby when she gives birth. The society and the nation as a whole will be redefined for its citizens will be patriotic and the leaders ready to serve.

We can redefine the future if we begin working on ourselves. There is no need pointing accusing fingers on anyone, for everyone had played a part in the jeopardy we have fallen into. And therefore everyone has a part to play in rebuilding the future and making the world a better place.  It is high time humanity understood the concept behind their existence and begin to live according to God's purpose for them. The future will take a new shape if we are not guided by hatred, envy, greed and other vices but love which edifies. We need not to keep folding our hands but begin doing the needful remembering that if those in the past had folded their arms too, the line 'The labours of our heroes past' will not be included in the national anthem. Let us see the need of coming out and exercising our franchise in choosing the right people who will lead us.

The academic future of our children and youths is in turmoil for the university is a corrupt place. The lecturers receive money to pass a student who wrote nothing in his exam, they even fail those who write well so as they can be paid. The students are not spared for many are unwilling to read but ready to pay their way through. If the university is corrupt, then the world is corrupt. We study anti-corruption but many are living comfortably in corruption. What irony! We are the ones who shoot ourselves in the leg. Parents too must be mentioned for they take their children to special centres to enable them pass national exams. When it comes to unionism, so many exhibit lackadaisical attitude hiding behind the phrase 'politics is dirty'. Service to humanity is one way of redefining the future. We should take up responsibilities rather than run away from them. And again the whole concept of unionism is misunderstood. For many who go into it are after enriching themselves rather than serve the students who are their responsibilities. And this is the kind of mindset the students take into the society and when they become leaders they enrich their pockets and that of their families instead of work for the betterment of the nation.

Conclusively, a good example of one who portrayed humanity is Mother Theresa of Calcutta. Her whole life was dedicated to serving mankind. If we follow her lifestyle then we are building a generation where things will move smoothly for us.

If only love defines humanity, then the future can be redefined.