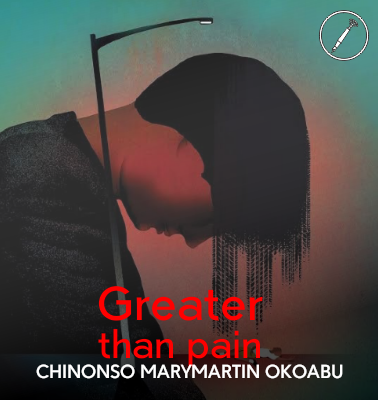 I am an empty soul. A void so deep as the ocean has filled me. I am just like chaff blown about by the wind. My parents look at me and I see them look through me like I was a shadow that follows the body around. They did not say, but I know they have lost not only one child but two children, for I will never be the same again. I keep seeing my sister Evelyn everywhere, with anger, hatred and accusation in her eyes. I wish to be dead, but I somehow know it will not end there. For even in the grave her spirit will still come to haunt me.

Evelyn was my junior and only sister born to my parents after six years of having me. I had enjoyed the love, care, protection and pampering of an only child for six years until my parents had her. She became the centre of attraction to them, for she came after they had given up all hope of having more children, and this spook a kind of jealously in me that I refused to accept. She was a sweet little girl that grew up very beautiful and smart. She adored me as her elder sister, and with time I learnt to accept the fact that there will be always someone to share the attention I got from my parents with.

I grew to love her very much, but there was this hardened part in me that wasted no time in hauling her over the coals whenever she got me angry. My parents frowned at the way I scolded her, begging me to correct her with love and not with so much anger. I refused to see it that way, letting them know I had to be strict with her so she wouldn't become a spoilt child. The scale fell off my eyes a little too late. And every day, I cry and groan in unending agony, wishing I could turn back the hands of the clock.

I was fifteen when I got more liberty from my parents. I could go out for parties, visit friends provided I returned on time. I did not misuse the freedom given to me. I went out once in a while and returned at the right time. I took my sister out with me sometimes, and we had great times together.

One Saturday, my parents went out early in the morning, after granting us permission to attend my friend's birthday party. My sister was so happy and practically pranced about all morning.

By noon I stepped out to my hairdresser to style my hair. And by the time I returned, my sister had busied herself with applying my make-up on her pretty face.

"What's this Evelyn?" I was practically spitting out fire. "Haven't I warned you to stay clear from my make-up?"

"Please Sis," Evelyn turned to me. She managed to look contrite and beautiful at the same time. "I just wanted to look beautiful like you do too."

"That's not the point, you were not supposed to touch my things without my permission. And mummy also warned you not to touch my make-up that you are too young."

"I'm not young, I'm nine," Evelyn pouted. "And I asked mummy this morning, she said I can."

"But you still shouldn't have, you don't listen, Evelyn and because of that you are not going with me to this party."

"No Evelyn, that's your punishment for being too stubborn." I made my way to my room with my make-up bag in hand and she followed me.

She stood begging me while I did my make-up, but I remained adamant.

"Please na, I won't do it again," Evelyn tailed my behind.

"I have made up my mind and I'm not changing it. I am also going to lock this door so you won't come after me."

"No na, don't lock the door, I won't leave. What if I want to go out?" Evelyn protested running after me.

"You have everything you need here, so no going out."

I locked the door and left for the party leaving only Evelyn in the house and compound. After so much fun at Linda's house, I started for home by 5:00 pm. The gate was unlocked when I returned home, so I knew my parents were back. I entered the gate and saw my parents standing still at the door. My steps were slow and measured as I made my way to the door. I began perceiving smoke immediately. What could that be? My mother suddenly screamed falling on my father who tried to hold her. I saw Evelyn's charred body before I saw the fire and then I saw nothing more.

I woke up to find myself in a strange environment. It was hours later but it seemed like an eternity to me. I tried to sit up but a hand stopped me.

"No, no rest. You need to rest," the hand pushed me back to the bed.

"What happened?" my voice was croaked.

"You need water," a hand brought a glass of water to me and I was helped up. I drank the water and lay down back. My head felt very heavy as I tried to remember what happened. And then it came to me - my locking the door, my parents outside our house, my mother screaming, the fire and Evelyn's charred body. Evelyn.....Evelyn is dead, burnt by fire.

"No, no, no!" I didn't realise I was screaming until the same hand held me.

"Evelyn, Evelyn is dead, my sister..." Those were the last words I remembered saying before I gave in to the thick darkness that overwhelmed me.

I woke up the next morning to find myself alone in the room. I managed to stand up from the bed and followed the door which led me to the parlour. It was then I realized it was my cousin's house. Everyone in the parlour sat quietly, some with tears in their eyes, while others stared at empty spaces. I felt the stares on me as I made my way in. I saw my mother on the floor looking haggard and lifeless. My aunt was beside her rubbing her arms. My father was on the chair with his head bent. He looked up and his eyes found mine.

"Why did you lock the door?" I could barely recognise his voice.

I tried to form words but my mouth only parted with no word coming out.

"I said why did you lock the door?" he shouted, his voice hoarse from unvoiced sobs.

"Michael, calm down," my uncle tried to calm my father. "Your daughter is not in the right state of mind."

I tried to speak again and I began feeling dizzy again. One of my aunts stood up and led me to a chair.

"I.. I.. I wanted to punish her for using my make-up without my consent," the tears began falling in torrents.

"And you locked the door against her!" my father thundered and stood up. "You see what you have caused!?" he held out his hand like he would squeeze my neck, but my uncle dragged him to his seat.

I really wished he had done that - squeezed the life out of me like I had done to my sister. I killed my sister, my baby sister. The realization was a painful blow to my head and I saw myself reeling from the effect. My aunt held me as I cried out in excruciating pain. Something sat in my throat refusing to come out and refusing to go down. My heartbeat felt painful in my chest, and no one could save me, not even death will.

Evelyn's burial took place three days later or so I believed. She was buried in our compound. I don't know the exact details of what happened for I kept slipping in and out of consciousness. We remained in our cousin's house after the burial, though our house had been put in order. The things burnt in the parlour and kitchen by the gas explosion had been replaced.

I began finding it difficult to sleep at night and at noon, for I saw Evelyn whenever I closed my eyes. Even sometimes I seem to see her with my eyes wide opened. A kind of resignation had settled in my parents as they tried to mourn their child and bury their pain.

One afternoon, I had settled in a restless sleep, when suddenly I woke up screaming. My family rushed to my side trying to calm me, but it was fruitless.

"We need to call a doctor," my uncle said.

A doctor who lived by came immediately.

"She is finding it difficult to sleep," my father explained to the doctor.

"Okay, let me give her something to make her sleep now, so we talk more."

"No, I don't want to sleep," I began thrashing around, fighting off the hands that tried to keep me in place. But what was a weak girl against four people? They finally held me in place and the doctor pierced the needle in my veins. "No. I don't..."

I finally sank into oblivion and my sister's hands were ready to receive me for more torture.