By Aniekan Andikan 19 months ago 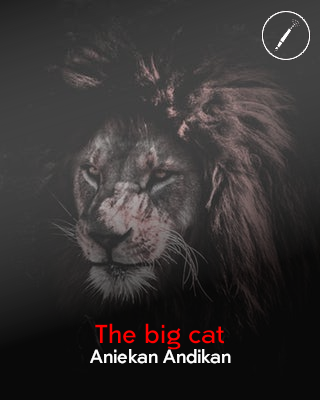 In the dog-lion fight, it was initially a game of intimidation and no one knew this better than the dog who had earned the nickname Bravest by reputation. He had gone to the battle field with all amount of confidence because a friend had told him that someone from the cat family dared him.He was angry that a mere cat was popping his mouth at him so he rushed out to deal with him furiously to set example for others but when he saw the kind of cat he was up against, his confidence flew out through the windows of his soul. So, the next plan was to intimidate the lion and win the fight.The game was on and he was on top of it. He started with a low, menacing growl, his eyes showing as slits, ears pointing up sharply and mouth intentionally baring long sharp dirty teeth. Then he gave three sudden sharp barks at the lion.It seemed the lion who was in a sitting position. Chilling. Only just noticed him. He glanced at the dog and almost immediately turned to look at more important things. He glanced at the dog again and blinked at him, wiping his hairy lips with a tongue that seemed too long.The dog felt the contempt and advanced at him boldly, increasing the volume and frequency of his barks at the lion.The lion did not look at him again. Instead, he looked upwards and opened his mouth in a gaping yawn, baring dagger-sharp yellow teeth. He was hungry or maybe just bored at the noise from the dog.The dog stopped dead in his tracks. He’s never seen such long sharp weapon before. He imagined those sinking through his fur and piercing into his delicate skin and his liver failed him. The little resolve he had managed to gather dispersed and was gone with the wind. Before he could understand what was happening, he found himself running madly and blindly from the battle field. He made sure his eyes did not leave the lion as he galloped away for dear life.He continued, fast and furious until he ran head-first into a hard immovable obstacle. He was stunned and before he passed out, the only thing that played out on his mind was the lion’s yawn.The lion had initiated the most subtle intimidation of his own because the vicious barks from the dog was getting to him, putting the fear of the lord in his heart. The idea was to codedly bare his teeth at the dog so as to stop him from coming too close. If that did not work, he would get up and face the dog and if that did not stop the mad dog then he would have to roar. The roar was always sure to get the desired result. He was not really in the mood for any physical confrontation so it was a huge relief when from the corner of his eye, he saw the dog stop abruptly and before he could figure out what had happened, the dog was doing a “four-forty” across the battle field. Since the dog’s eyes did not leave him, even for a moment, he could not show how relived he was but then the dog ran into a tree and lay sprawled on the ground.He walked slowly and majestically towards where the dog had fallen and sat patiently in the shed under the tree, two feet behind the passed-out dog.After a while, the dog woke with a start. He shook his already aching head vigorously, ignoring the pain. He thanked God for life, for surviving a fight with the big cat, the lion with the wickedly long teeth.The lion observed the dog in front of him wake from his slumber. After he was sure that the dog felt safe, he leaned closer and tapped him on the shoulder.The dog turned around slowly. He thought that maybe someone was trying to congratulate him on escaping the big cat but he turned to face his biggest nemesis whose paw had already shot out to grab his throat. He whimpered, half from shock, half from the lion’s talons digging into his throat. The lion pushed him to the ground and grinned down at him.As the dog saw the lion’s long dark yellow teeth up close and personal, he died before he actually died.