By valentine Samuel 3 weeks ago 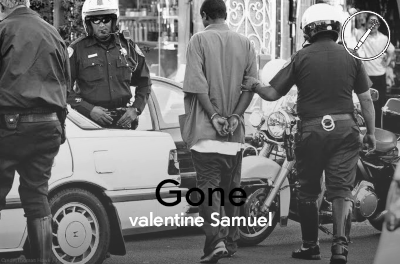 Stop there! Get down, they shouted.

Quiet, I heard, if you move, I shoot, he screamed.

But I was terrified.

The mere sight of his cocked and pointed gun left me transfixed like my life was about to end suddenly.

I thought I had freedom of speech?

Where are you going he asked?

Hush, I heard. If you move I will shot, if you move you are dead, he screamed, like my life had no importance and value.

Shut up, he shouted while pointing his cocked gun at me like my life was his to keep or take.

Within my mind, within my fragile mind, I was still thinking and wondering what my offense was.

Is it a crime to be a Nigerian?

Is it a crime to be a young boy in Nigeria?

Is a crime to be earning a living and driving a car?

The youths are tomorrow's leaders, they say. What a cliche.

The youths are the leaders of tomorrow, I keep hearing, but the same youths are being killed like flies every day and nothing is being done.

No Wonder our grandfathers are still in power.

No wonder the youths are scared to commit to a task.

The youths are been slaughtered every day and the authorities are quiet. Why won't they be mute when the same authorities ascribed with the power to protect are still the perpetrators of the act.

Is this your car and phone, he asked?

What do you do and how much is in your account? He asked but this time with a dubious look in his eyes.

I'm a student, I echoed

I'm a musician, I shouted

I'm a fashion designer, I muttered

I'm a dancer, I cried

I'm a writer and I can't tell you how much is in my account I protested.

In the heat of the argument, he raged. Quiet your mouth!

But I wanted to show him that I know my right and would not be intimidated by him or his gun.

Shut up, he screamed but this time his hands were on his gun. But before I could shut up, he had cocked his gun and bang he fired.

For a moment everywhere grew silent and pain was all I could feel.

Laying on the floor, I could hardly breathe.

It became so difficult to talk, I saw myself grasping for air.

My voice became faint, my sight blurry and my body grew numb.

All I felt was pain, anger, sadness and agony