By Ojuroungbe Sodiq 2 weeks ago 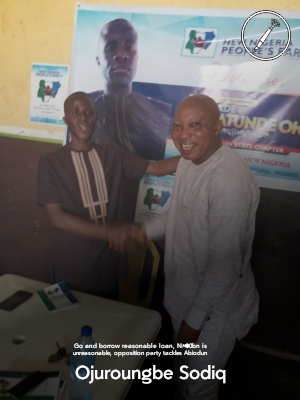 An opposition party in Ogun state, New Nigeria People's Party has described the N250 billion loan the state governor, Dapo Abiodun want to collect as an attempt to put the state for sale.

The chairman of NNPP, Olaposi Oginni  while speaking with newsmen on Monday lamented that the N250bn loan is unreasonable.

Oginni maimtained that the NNPP will not allow the state government to access the three years credit facility.

The NNPP state chairman  noted that the party  will fight the government to a standstill in ensuring that the loan is not taken.

He stressed that the NNPP will take over government in 2023 and will not want to take over debt from the present government.

He added, "we will not allow this state to be put for sale and we are going to stop a kind of gangantum that the present government is talking about.

"We are not saying the government of today should not go for loan, you can go and borrow, but go for a reasonable loan; N250bn is unreasonable and that is the position why we said we should bring new narrative to our political system.

"We are going to fight the government to standstill and we are going to say that they cannot take that money because the new government of Ogun state is going to be formed by NNPP government.  We will not allow the present government to put the state on a high debt rate that by the time we takeover, we will be the one to be paying for the loan.

"They have never pass through any due process,  we want the governor to produce the excerpt of the State Executive  Council where it was debated and they agree that they should go for N250bn."

Oginni however expressed disappointment in the House of Assembly for approving such loan without public hearing.

He further said, "we are disappointed in our House of Assembly because there was no public hearing for that kind of loan before they approve it; It is unacceptable, we are not going to take it, it is not going to happen."

The NNPP state chairman also warned all financial houses to "desist from this kind of a fraud because it is an attempt to put this state for sale.

"New Nigeria Peoples Party from its name is new in all ramifications because we want a new Nigeria. It is a party that is looking forward to change the narrative system of this country and in particular in Ogun state.

"NNPN has arrived to take over the reign of government in 2023. We are here to stop the gangsterism of government to put Ogun state for sale. "