By Okechukwu Ukegbu 17 months ago 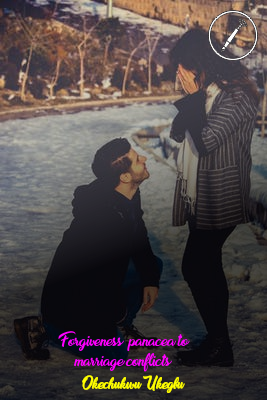 On daily basis, marriages are crashing across the globe.Even our legal instruments are not helping matters as they are employed easily by those who preside over our law courts to dissolve marriages- without recourse to the biblical injunction" what God has put together, no man should put assunder".

If the parties to these marriage conflicts had learned to forgive, the spate of divorces could have been reduced to an encouraging level.The consequences of broken home are multi- dimensional. It affects virtually al, parties associated with the marriage-the children, father, mother, even the extended family. If these implications were put into consideration before parties to the marriage opt for divorce as a last resort, they couldn't have contemplated divorce.

On the side of the woman, it inflicts a perpetual stigma that would be hard to shake- off. She is ridiculed in the compound, the streets, the markets, and whereevr she goes. To say that the experience would subject to an object of caricature is an understatement. If strict caution is not applied, both parties- the manm and the woman- would be exposed to promiscuity. The consequence in this direction is that either or both parties may be vulnerable Sexually Transmitted Diseases (STDs), and if care is not taken may fall victim of the dreaded Human Immune Virus (HIV), which graduates to Acquired Immuno Defiency Syndrome (AIDS). If the situation degenerates to this abysmal level, the children would be rendered orphans and face a very bleak future.

The multi- million question here is:"Why didn't the either or both parties of the coonflict explored the theme of forgiveness before the conflict degenerated. Conflict is ineveitable in every human relationship- be it indidividual or corporate. What is important is how the conflict is managed. A badly managed conflict degenerates and leaves sour taste on the mouth of the parties. The Chinese see conflicts as opportunities to improve harmony in relationships. On the other hand, since ambition, interest, perception to issues, ego, differ in relationships, conflicts are bound to take place.

It is important to recognize that the ability to forgive does not make us better than the offender, rather, it demonstrates the wisdom of the forgiver in dealing with the issue. To forgive is to offer opportunity for a new beginning to the offender, and provides a process of healing

Sometimes In Delta State Polytechnic :Narrations From She Who Never Left Lagos
Articles
13 months ago
Common Little Mistakes Women Make
Articles
16 months ago
One Thing In Common
Articles
20 months ago
CORRUPTION AND THE NIGERIAN PUBLIC LIBRARY
Articles
15 months ago
I WANT TO RAISE HUMANS, NOT GENDERS
Articles
12 months ago
Love
Articles
19 months ago

COVID 19 Strengthening Communal Spirit In Times Of Great Need
Articles
4 months ago
The Many Accolades Of Gov Ikpeazu
Articles
5 months ago
Okoroafor And His Entrepreneurial Adventures
Articles
11 months ago
The Passing On Of Another Colossus, Elder Chibueze Monday Nwachukwu (1940-2019)
Articles
10 months ago
Dr. Okwuonu, A Nigerian Politician With A Different Political Philosophy
Articles
15 months ago
That Igbo Language Will Not Go Extinct
Articles
17 months ago
Previous Next