Farmers Are Strong,tough ,thick And Wicked

By Victor agbo 5 days ago 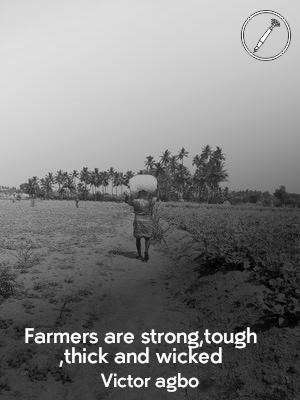 The aphorism " farmers are strong, tough , thick and wicked " doesn't just regulate their lives but also reflects on what they face on daily ,their values and what faces them .

Through the vulnerable times ,I will deliberately classify them as tough . This point we diligently look towards the bitter challenges facing them ,when I said " bitter " I meant the tick the time that says the clock .

First of all what are the challenges

Every reasonable citizen of the country should know these and also do self analysis on this .

* The herdsmen/ cattle crops battle : the battle has gone miles to the very extent of blood shed ,it's majorly caused by disdain . The herdsmen valuing their flocks and we the farmers cherish our crops resulting to the both parties seeing each other as inferior spares.

* Lack of agriculture and agroforestry infrastructures; it's among the great predicament facing both the average and high class farmers.

*Lack of proper fertilizers for managing the crops and so on.

On the aspect of the farmers being strong,that's their internal vigour which out plays the external result. For the body to function well it has to maintain good balanced body temperature despite the  fluctuations.

- proper nurturing of the crops

Coming the thick aspect , let us looking into the meanings and synonyms .

Thick (informal) : friendly and intimate which means they do understand each other . Which resulted in the term" tight-knit"

I guess using illustration will sound better and easy to digest in our minds .

A successful farmer ,who farmed about 200 square meters of land in the year 2017 got #500000 from rice , #800000 from corn after harvesting period using crop rotation method  . The next year ,he doubled his farmland and added more crops like bendel's cucumber , garden eggs and had a 50 square meters of nursery tomatoes.

For him to accomplish this rug and strength demanding work ,he will utilize about 3600-4600 kcal of energy whether he did the weeding or not . But instead his mind were stationed in outcome which called the " product cost and gain ".

They are also thick skin that's why I call them the gladiator.

One could assign that the same person, praising the farmers has also tagged them " wicked" .

For me to explain this very term ,I will also have few fingers pointing their mischievous in nature.

For the farmers to have a successful farming season,they must take felicitous care of the farmlands and crop .

To be sure that the crops grew properly and automatically lacks no nutrients . On doing this both early colonies and pioneers receives the painful, undesirable events when they are uprooted , which denies them of their own very life and existence..

The early colonies are unwanted plants like ferns ,mosses and the goat grass ,side acutad etc which naturally grew on their powers.

The pioneers are plants grew on the lands by dispeasl by wind,man and animal that's plants like

They also wicked to pests like mealybugs ( mealybug disease of cassava) which causes disease like tuber rot ,leaf spot .we have Aphids which affects cocoa and groundnut .

For production of crops

- development and use of high yielding varieties of crops.

- Timeliness of farm operation ie doing the right thing at the right time.

I will explain them bit by bit .

Akpura : they're tall in nature and grew like trees with height of 500-650 cm ,they are rich in vitamin .

They also serve in reducing arterial pressure and serve as narcotic drugs .

Throw more lights ,they originally contain pro vitamin B12 which when heated up to 80-90 degrees are converted to vitamin B12.

They help reduce or fight against iron deficiency anaemia .