By Zainab 15 months ago 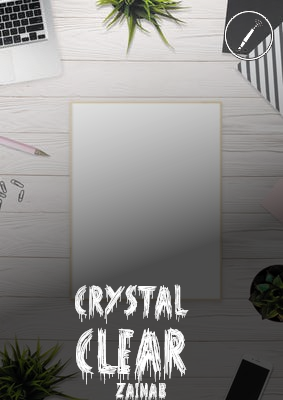 Ebony and AJ had just moved into their new house at one town hill, Abuja. It was a quiet place, with not up to fifty houses on the mountain, most of which were vacation houses. It was a huge house and they needed workers.  A gardener who could also take care of AJ’s horses, a sitter who could also cook and a house keeper. Ebony had been lucky to find the gardener and sitter herself on the first week. After two weeks of searching for a housekeeper, crystal met AJ on his way back from work and told him that she had heard they were in need of a housekeeper and that she was one. AJ was happy to hire her immediately, he was already tired of listening to his wife complain about how difficult it was to take care of the house alone.

Ebony knew the moment she saw crystal that there was something wrong with crystal. The way she stared, the way she looked and her smile. She saw nothing but darkness, in her big dark eyes, but she was willing to ignore the goose bumps she got on her body if it meant she was going to get help with the house chores, at least until she found another house keeper. Soon Ebony began to notice other things with crystal, the way she stared at AJ, the transformation when AJ was around. Her grumblings transformed to giggles, her messy dark long hair was less messy, and her steps were louder and bolder. Ebony could tell that crystal was in love with AJ, and when she told AJ he had laughed so hard, she began to also think it was funny.

It wasn’t funny one night. Aj always left his lamp on and the windows by his side open when they slept, while ebony preferred to sleep in complete darkness. Something that night had woken ebony up; it was a presence she felt. She opened her eyes and immediately caught the silhouette of a body standing by the window next to AJ staring at him. It was a woman, a girl, slender and tall like crystal, long hair just like crystal; it had to be crystal, ebony thought. She called AJ’s name, and tapped him to wake up. Her voice trembled just like her entire body.

“There was a woman outside just now,” ebony said to AJ who looked perplexed and very sleepy.

“it was just an animal, nini,” but ebony knew what she saw and it was no animal,” let’s go back to sleep,” he said pulling ebony into his arms and rubbing her back gently.

The next day, after AJ had gone to work, and crystal had finished working, Ebony secretly followed crystal. She followed her through the bushes and scanty forest, and at point ebony knew that crystal knew that she was being followed. Crystal didn’t act like she knew but it was impossible not to have known, and so ebony stopped hiding and simply trailed behind crystal, until they reached a small tent in the middle of the woods. Crystal turned and stared at ebony, who was standing a few feet away and also staring.

“Why have you followed me,” crystal asked her face expressionless, but her eyes dark like the night.

“I saw you last night,” Ebony said, now wondering if it was smart to follow crystal to the woods alone.

“You’re fired, and I’ll call the police if I ever see you around my house or my family,” Ebony warned and turned to leave.

“ no, you’re fired Ebony,”, crystal whispered and pulled out a kitchen knife from her back pocket and ran at ebony. Ebony turned to see crystal running to her with a knife, and turned to run too, but immediately tripped and hit the ground, falling on her back.

First crystal sat beside her, and then brought out a handkerchief and stuffed in ebony’s mouth. Her eyes begged crystal to stop, tears rolled down her eyes, and the last thing she thought about was the very first day she saw Crystal. Her eyes, they had always been a red sign: she looked into crystals eyes one more time, before she felt a knife pass through her heart. Crystal stabbed her heart first and then, the baby in her stomach, three times, and then back to the heart again, three more times, then she went back to her tent and brought out a lighter and gasoline. She burnt the body until it was almost ash and bones only.

Crystal sat next to the body until it was night, then she got up and walked back to AJ’s house. Her new house, she thought and smiled all the way back.

Ebony’s two sons were sleeping on the floor while their sitter, was sprawled on the sofa. She made a mental note to fire the baby sitter and to find a new one as soon as she was settled in her new house. She entered the master bedroom and picked all of ebony’s pictures that were kept next to AJ’s and threw them in the thrash; the ones that had both of them in it, she tore Ebonys face out. She made another mental note to replace the pictures of ebony with pictures of herself.

When she was done, she had a warm bath and wore one of Ebony’s night gowns, and then lied down, covered herself in blankets and waited for AJ. Now she was truly at peace and could not wait to spend the rest of her life with him.

When AJ returned, she didn’t move from where she was or turn to look at him, she wanted to surprise him.

“Nini, I’m sorry I’m late. Work was way too hectic today”, he crawled behind her and lay next to her with his hand on her waist. “How was your day? Miss me?”

“Hectic and yes, I’ve missed you for way too long. You’re here now.”