By Joy Nwankwo 15 months ago 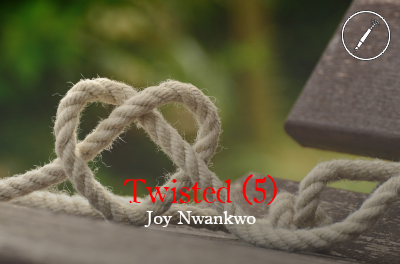 As the water washed down her body, Eunice’s mind was active. It felt as if the water was washing away her grief and clearing her mind to what she had ignored all this while with Kenneth. Her mother had spoken based on what she saw and though Eunice thought she might have said some things because she wanted to console her, she knew she also said a lot of truths and the most startling of them all was that she was not in love.

Eunice was not in love with Kenneth.

While it seemed as if this realization was normal, it shocked Eunice because she and Onyinye had suspected that Kenneth was going to propose to her and Eunice knew that if he had, she would have said yes. It was what she wanted, it was what was expected of her.

When a lady who desired to get married has a great career, a handsome and financially stable boyfriend who she believes plans to propose to her on her thirtieth birthday, she feels as if the world was at her feet and sometimes she forgets to ask important questions, questions like; Are you sure you are in love and not deep likeness? Are you sure you are not doing this because you think you have to? Are you sure this is what you really want? Her Ma’s speech got her thinking, maybe she was not in love after all. But then again if she was not in love why was she crying when she found out that Kenneth was breaking off with her?

Maybe because he was not just her boyfriend, he was also her friend and she knew that she would be losing not just their romantic relationship, but their friendship too. She hated losing friendships. She hated the thought of losing Kenneth’s friendship. She hated that their cordial relationship had to end with his breakup. Or maybe it was the shock of the breakup text.

There is something heartbreaking about a lady who expected a wedding proposal on her birthday getting a breakup text in the morning instead of a birthday wish. It was worth a lot of tears, a whole lot of tears.

So that explains her tears and her, barely missed, slip into depression. She was grateful that her Ma called her when she did and opened her eyes to the reality of things. She would shake it off, although she had a feeling that it would take a while for her to get used to the fact that she was now free and no longer in a relationship. She would also have to figure out a way to deal with Kenneth whenever she saw him.

They were friends and moved in the same circle in church. She was bound to bump into him at some point and she hated drama so she had to find a way to hold in the disappointment and anger at the way he broke things off. She had to make sure it didn’t get messy as some breakups are wont to do. She would have to find a way. But for now, she knew she had to have fun. It wasn’t every day she turned thirty. It was a once-in-a-lifetime experience. She was just turning off the shower when Onyinye called out to her.

“Are you trying to drown yourself in there?”

“Haha, very funny,” she replied with a humourless laugh. “I’m coming out.”

“You had better, or I am coming in there,” Onyinye replied, still wondering at her friend’s sudden recovery from a broken heart.

Thirty minutes after she came out from the bathroom, Eunice and Onyinye stepped out. Onyinye was grateful she chose to take her mother’s car for a ride as it saved them a lot of stress of jumping buses as they went from the cinemas to the confectionary for ice cream, then briefly to the beach before they went window shopping.

It was evening by the time Onyinye was certain that her girl had gotten enough fun for a thirtieth birthday. She would have loved to call their mutual friends for a small party but she knew it would be too much for Eunice to handle. She just had her heart broken, and although she seemed to have gotten over Kenneth too quickly for comfort, a heartbreak was heartbreak and Onyinye wondered how long before her friend would fall into another crying bout. She planned to be here whenever it happened.

It was time to call the day a wrap, right after they have dinner at Forks and Fingers, one of Eunice’s favourite restaurants.

The excited smile on Eunice’s face when she saw her turn towards the restaurant showed Onyinye that she had really made the day memorable for her best friend.

Eunice reached for a seat facing the door, but Onyinye quickly grabbed it out of her reach.

“You have been mopping through the day, and I can hear the wheels in your head still turning,” Onyinye explained. “Allowing you to sit where you can see the comings and goings at the door means you will forget I’m here. No thank you. I’ll sit there.”

Shaking her head, Eunice smiled slightly. Onyinye was right, her mind was furiously working. If things had gone as she and Onyinye had envisaged, Kenneth should be before her right now, for dinner and he would be reaching into his pocket for the ring and maybe going down on a knee to propose.

She couldn’t complain, as Onyinye was fun to be with and she had decided that she was not in love with Kenneth, but it was still disappointing.

She sat and reached for the menu even though she knew what she wanted. She was actually trying to blink away her tears, so she buried her face behind the menu even as she noticed that Onyinye was restless on her seat. She blinked rapidly and thought of something that will make her laugh and drive away the tears.

When she was sure her eyes were clear, she plastered a smile to her face and took away the menu ready to act happy again.

Before her was Kenneth smiling in all his glory.

Onyinye was nowhere to be seen.

Eunice knew at that very point that she would kill her best friend. Right after she rejects Kenneth’s proposal.