By Joy Nwankwo 17 months ago 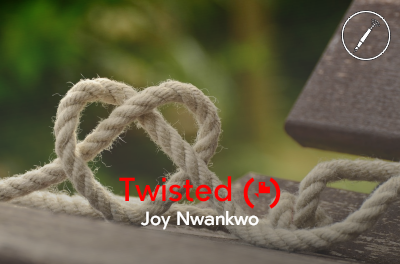 Eunice opened her eyes and groaned, her eyes were heavy and sticky, a headache was starting and her mouth was dry. Was she falling sick? She couldn’t afford to fall sick at this period as her desk was still filled with untouched works.

She turned to check her phone to know the time and get the day started, maybe she could call her girls and hangout to ease off some of the stress. She was lucky to have finished the report last night, maybe after the hangout, she would edit the draft.

Picking up the phone, she frowned when she saw it switched off. Why was her phone switched off? She never does that because she knew she could be called every time and her job as a social worker meant that she should always be available. She tried to remember what happened just before she slept, and then everything came crashing down, the early text message from Kenneth which left her heartbroken.

After confirming that Kenneth was actually breaking up with her, she had felt her body wracking with sobs. She was still trying to figure out how to react to the breakup text when calls and other birthday texts began coming in. Rejecting the calls, she switched off her phone and focused on her tears. She must have slept off from exhaustion.

But here she was again.

She knew she couldn’t ignore the rest of the world and so she put back her phone on, there could be some child who needs her. Her broken heart could wait. The vibration from the phone brought back her mind from the still shocking remembrance. She looked at the screen to see the caller. It was Onyinye.

Onyinye was the best friend everyone wished for and Eunice knew this because Onyinye was her best friend and has been so from their secondary school days. Their meeting had happened in the funniest of situations; Eunice had been bullied by a boy whose love advances she had rejected and Onyinye had warned him to cease the bullying but the boy had called her bluff. The next day, the boy tried again and Onyinye had been ready waiting for him when he tried to push Eunice, without thinking twice she kicked him between his legs and told him that next time she would do worse if he ever tried harassing Eunice again. That was the last time the boy disturbed Eunice.

They were called to the staff room and punished, but that was the beginning of their lifelong friendship. They slowly became a duo which no one could understand or conquer, doing everything together. The friendship had lasted through their years in the same university.

Seeing her friend’s number, Eunice knew there was no one else she’d rather share the bad news with. The moment she picked up the call, she burst into tears which flowed harder when she heard the worry in Onyinye’s voice.

“Hello? Eunice why are you crying?” she asked. “Please tell me this is a prank. You can’t be crying on your birthday. Eunice! In fact, I’m coming over.”

When she realized that the call had ended, Eunice rolled herself into a ball and cried harder. She didn’t want to talk to anyone and she ignored all the calls and didn’t open any text. She only got up to get the door when Onyinye knocked.

The moment she saw Onyinye, she fell into her arms. “Ke...Kenneth broke up with me!” she announced before Onyinye asked and she sobbed harder. Gently leading her to the ugly but impressive couch they had picked together when Eunice was decorating, Onyinye calmed her down.

“Hush… Did you guys quarrel?”

Not trusting her voice, Eunice shook her head.

“I don’t understand, when did this happen?” Onyinye asked.

“T … To …today,” Eunice said, trying to speak between sniffles.

‘So he just came here bright and early to break up with you?”

“He did what? Sent you a text? He didn’t have the decency to do it face to face?”

Hearing the outrage in her friend’s voice showed Eunice how badly she had been treated, but it also calmed her down. Someone was angry for her and that had a healing effect.

Reaching for her phone, Onyinye stood up and headed for the door.

“Where are you going?” Eunice asked, alarmed. She didn’t want to be alone.

“I’m going to see that wimp and ask him questions, if he has no sensible answer, I’ll deal with him,” Onyinye said, closing the door before Eunice could stop her.

Eunice had a short gleeful moment where her mind conjured up an image of Kenneth groaning from the pain inflicted on him by a kick to his groin given by Onyinye. If she weren’t so distraught, she would have laughed, but instead, she cried harder until she was drained.

She slept off, exhausted from crying again.