Boxing: A Death Warrant Or Truly A Sport

By Kareem Itunu Azeez 7 months ago 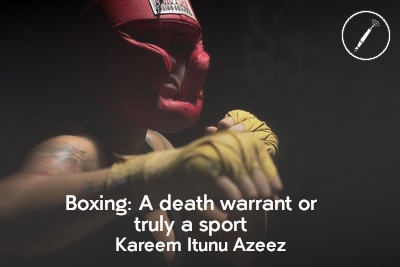 Boxing: A death warrant or truly a sport

Boxing! I ask, is it a form of another fun sport or just a death warrant, or particularly a kind of sign off into the ring of no return, where all that is done is what is expected to be done.

Over seventeen heavy and direct punches to the head, unstopped and continuous falling off the ring, Hugo Santillan becomes the second boxer to wash away at the dawn of times in just a tragic week in the world of boxing, he was only 23years of age, an Argentine, and although holding a record of successful victories, his time has come and was abruptly cut short through the "Could have stopped hands of punches" I couldn't have fathom another intro to my story.

Thousands flocks to watch this death warrant of a sport, although, this tussle called boxing may have produced legendary entertainers, philosophers, and even activist, the likes of Muhammad Ali, Evander Holified, Mike Tyson, one would almost agree with me that their passion lies only in entertaining and happiness of those who have crossed the seas to see them fight. They too will go any length to prove how entertaining boxing could be.

Few days before the death of Santillan, there was one,who bit the dust also, those of us who remembered, the Russian boxer Maxim Dadashev, he had never lost a professional boxing match when he entered the ring at the MGM National Harbor resort in Oxon Hill, Md. Acoording to the new York times,But after 11 rounds in which his opponent, Subriel Matías, landed a series of heavy blows, Dadashev’s trainer urged him to accept defeat, eventually signaling to the referee that the match was over.

In the presence of his wife, the 28, year old also bite the dust, allowing his emotions of winning overshadowed his quest for life.

Let me even remind us that a female, and a prospective mother also went down the drain in this thing called fist fight, she was Becky Zerlentes, she died in the ring after she was knocked out by Heather Schmitz. Becky fell in the ring and never woke up. She was the first female boxer to die in the ring, and ultimately expired to eternity

The sport of boxing, has it roots in many records, but going back to times, and for of all sources presented, I did singled out this source of reference, While humans have fought in hand-to-hand combat since the dawn of human history, the earliest evidence of fist-fighting sporting contests date back to the ancient Near East in the 3rd and 2nd millennia BC.

The earliest evidence of boxing rules date back to Ancient Greece, where boxing was established as an Olympic game in 688 BC. Boxing evolved from 16th- and 18th-century prizefights, largely in Great Britain, to the forerunner of modern boxing in the mid-19th century with the 1867 introduction of the Marquess of Queensberry Rules. Those were the primitive era of boxing to me, and it was also merged by fights to death which written records could not note.

Traveling down the road in comparison to other sports alike, deaths occurred to one in various forms and fashion, no one knows when their time would come, not even those on life support machines, but every boxers, nowadays believe in two things before they stepped into the ring, its "Kill or be killed", now people may hate my criticism, and definitely People are going to jump in to defend boxing and say “people get injured and die in rugby, car racing even football. etc” – but the difference is, the aim of rugby is to score tries, and the aim of racing is to get across the line first – and also to football, which is the most famous and by far widely viewed on planet earth, but the aim of boxing is to land punches on your opponent injuring them in the process. A serious discussion about both the acute and chronic impacts of boxing on the competitors is needed.

When we remember our own African brothers, who have graced this sport, one have to fall in love even with its dangers, the likes of Samuel Peter, of Nigeria, Doyle of South Africa, Isaac Dogboe of Ghana, not forgetting the recently dethroned world heavy weight champion, our own Anthony Joshua, I remembered his words after his loss to Andy Ruiz, he said, "And that's why I say, and I'm going to keep on saying, that I have to take my loss like a man, no blaming anyone, no blaming anything, I'm the one who went into there to perform and my performance didn't go to plan." He understood how Much there was for him to achieve rather than to let passion wipe him away from the surface of the earth.

According to the Bird L.C Surgery report, it was assesed that There were 339 mortalities between 1950 and 2007 (mean age, 24 ± 3.8 years); 64% were associated with knockout and 15% with technical knockout. A higher percentage occurred in the lower weight classes. The preterminal event occurred in the ring (61%), in the locker room (17%), and outside the arena (22%), evaluation for significant changes after 1983 when championship bouts were reduced from 15 to 12 rounds. Now by way of higher difference, 2007 to 2019, is a larger span of time, where many boxers have gone, reported and not reported, so I ask again, isn't it the right time to review or ban the game of boxing.

Hopefully it should be ban.....

When I say ban, some countries already are doing the needful based on their circumstances, countries like Norway, Belgium, Iceland, and Cuba, during the Fidel Castro regime, Cuba was a county who dominates when it comes to professional boxing, but maybe the countries leaders intuition might have speak volumes in understanding the dangers involve, even to a level where two boxers where banished from entering the Territorial boarders of Cuba their country of origin.

The likes of Erislandy Lara and Guillermo Eigondeaux.

However, let us not forget the joys that comes with the sport, the emotional moments of been a famous and celebrated champion in the ring, when I look back to the times of great Muhammad Ali, how do one not fall in love with the great sport, do we remember his words before his bout against, George Foreman, the poem goes thus;

Last night I had a dream, When I got to Africa,

I had one hell of a rumble.

I had to beat Tarzan’s behind first,

For claiming to be King of the Jungle.

For this fight, I’ve wrestled with alligators,

I’ve tussled with a whale.

And throw thunder in jail.

Injured a stone, Hospitalized a brick.

I can run through a hurricane and don’t get wet.

When George Foreman meets me,

I can drown the drink of water, and kill a dead tree.

Wait till you see Muhammad Ali.

I’m gonna show you how great I am!

How do one not just love sport as this? Or rather we get confused by this utterances, or is it about the short soliloquy by Mike Tyson, in the movie the Chinese Salesman before his suicide in the movie,

"Brothers and sisters let go of your greed, just let it go, and you will find peace wherever you may be', then I ask again how does one not fall in love with intellectuals as this, even off the ring.

I could go on and on placing boxing on the negative cards of human sport, but it has also serve various forms joy and source of entertainment for its lovers, however I hope measures could be taken to make it less risky by those associations in charge, to prevent future occurrences and loss of lives.

A campus journalist, and a local coordinator for students for liberty, West Africa.

He could be reached through, ikareemazeez@yahoo.com