By Charles Igwe 10 months ago 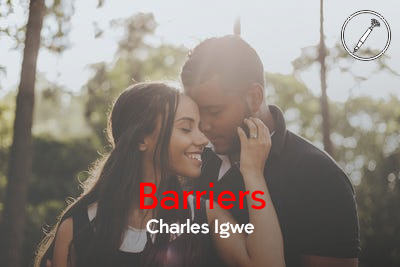 You call it madness, but I call it love

Ike could sense the shock and horror gripping her pretty face when he started weeping uncontrollably like an infant who desperately wanted to suckle his mother’s bosom. He understood how embarrassed and unsettling his actions were making her feel. It was not often you saw a twenty-one year male adult kneeling before a woman and breaking down into tears in a public park. He could still sense the searing pain on his heavily bandaged head which less than forty-eight hours ago had served as a Rocky Bilboa punching bag for three heavily-built young men. Kamara had insisted he tell her what had happened to him but he had refused to speak. He already suspected she knew the answer to that question and who was behind the attack but she was too scared to admit it. He was not going to hurt her feelings even more.

“Kamara, please don’t leave me. I can’t imagine living without you.”

He knew his tears were hurting her; it hurt his ego as a man too, a mockery to his maturity. Perhaps, this was why everyone was opposed to their relationship in the first place. However, none of it mattered to him now; their opinion, their slimy talks and plots behind his back. All that mattered to him was spending the rest of his life with her.

“Ike, please control your emotions. You know you hurt me with these tears. I love you but…”

“Kamara, that’s all that matters, it is.”  Ike burst out frantically. He knew he was beginning to scare her but he wasn’t going to back down.

”Stop it, Ike. We’ve been through this a million times.” The tears were beginning to trickle down her face too.

“We knew from the onset that what we share…” She hesitated, afraid to go on lest she hurt him further.

“What we share, what we shared was never going to lead us anywhere. It was always doomed to end up this way, in tears Ike.”

He was now shaking like a leaf about to be blown off by the chill wind of harmattan.

“Kamara, women get married to men they’re older than, it happens. Remember Macron? President of France and his wife Brigitte, she’s twenty-four years his senior. Christ! Kamara, twenty-four years. What about Jason Momoa and Li….”

It was too much for Kamara to bear.

“Shut up Ike!” She was now visibly annoyed and the way it transformed her was stunning. She was looking like an angry teacher about to spank her naughty student.

“Don’t you dare treat me like one of those your classmates you lecture at school.” Her finger was pointed at his kneeling figure.

“You’re trying to lecture me on women that married men they older than. This is Africa Ike, not Europe, not bloody America! I have already received a hell load of insults from family, colleagues and friends for staying in this relationship with you. Ike, a woman’s time passes.”

Ike was about to speak but the deadly look she gave him made him think otherwise.

“Look at me Ike, am not getting any younger. You are still some years from finishing school, getting a job and settling down. You expect me to just wait for you while you find your feet and all that?” She gently got him on his feet. Mildly, she caressed his face.

“I know Henry my brother did this to you. I know he arranged to beat you up.” She paused to allow him talk but seeing he was too stunned to speak, she continued.

“Ike, you were best friends. Now he despises you. Can you see why I said this is not going to end well…”

Her voice suddenly trailed off as Ike placed his finger on her lips and pulled her closely to him. They were so close their face was almost touching. The tension was too much to take, waves of passion clouding them.

“Kamara, you know what we share between us is real, it is true Kamara. You do remember the promises we made to each other, do you?”

Pressing his lips against her lips, he kissed her sensually. Kamara was shaking now; he could feel her tears dropping on his face. His hands were already on her waist, it was still tiny just the same way it had been when he gripped it the first time, when he had found out it was her he wanted to spend the rest of his life with.

Lost in his arms Kamara went numb. It was as if she had been pulled out of reality. She just could not hold back the tears. She was trying to imagine a life without Ike, her first true love but her mind was too cuddled to think clearly. She was trying to imagine a happy future with Ike’s overseas-based uncle; Doctor Steve, a surgeon in Paris but she could not think straight. The only memories that were reaching her now, clawing and gnawing at her mind like a predator ready to pounce at its prey were how much she loved Ike; a love that had defied in other peoples’ views, reasoning and common sense. They would never understand what she felt for this young, handsome teenager. It was she alone who understood such powerful feeling of love. It was she who had been there when it all began…