BOYS NO MATTER THE PRESSURE, JUST BE YOURSELF 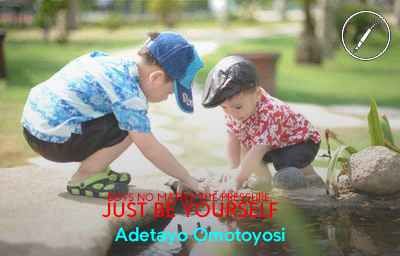 The Late Martin Luther king once suggested some of the things that should be in one's life's blueprints. "The first according to him is the deep belief in your own dignity, your own worth and your own Sumbodiness. He further stated that you should not allow anybody to make you feel that you are nobody. Always feel that you count, that you have worth and that your life has ultimate significance."
The society we live in today has suddenly turned to the oppressor that makes boys turn against their once held dear beliefs. These pressures comes in from different angles.
It could be peer pressure, pressure from family, religious organisation and so on.
Taking it from the friends angle, some of your friends might be doing well more than you. Some of them might be driving in flashy and expensive cars and you easily feel dejected that you are still behind. But life is a journey that requires process, that state you are in now is the process. Those friends that you envy are in their own process, so keep to your own watch as that is what tells your time.
Parental pressure can be frustrating to the extent that if you are not careful, you might eventually hate your parents. The pressure usually starts from educational accomplishments. Your grades might be poor and not encouraging, parents usually compare their kids to other kids, and that is the height of madness. (No apology.) Then the comparison begins and you start doubting yourself, your abilities to outshine your past grades, break the old records and set new ones.  Some boys were not lucky enough to escape that condition. They eventually lost focus and since that day, they never liked anything about themselves and even accepted to be behind the scene. They lost their self-confidence.
Boys like that that gave me the momentum to support the Boy-Child movement. I have many reasons why I have pitched my tent with the movement. Compare the number of Boys that have gone astray to their counterparts. If you are in the South-West, there are many young boys in motor parks that I see everyday smoking and drinking, this I find very degrading to the Boy-Child.
Boys also deserves all the necessary attentions given to the Girl-Child as well. Our Mothers take their time to prepare a Girl-Child to be responsible so they can marry a good husband. Eventually the Boy-Child that you neglected might eventually turn out to be the Man that will marry that girl.  If we both trained the Boy-Child and Girl-Child to be responsible and caring, the rate of sexual abuse and violence will reduce.
Let me leave you with this.
"Whenever you teach your boys not to rape, also teach the Girl-Child not to rape boys also."
Together we can make the world a better place for the Boy-Child.
Boys I wrote this just for you to become the better version of yourselves.

COVID-19: OGIC Gives Food Items, Cash To Ogun Residents
Stories
2 months ago
ESCAPE ROUTE
Stories
18 months ago
Of Love, Death And Wild Fantasies
Stories
11 months ago
The Imperial Body Guard ( Episode1)
Stories
2 weeks ago
Foretell
Stories
17 months ago
This Is How To Cut Off
Stories
3 months ago