BOYS DO NOT LET THE STREET DEFINE YOU 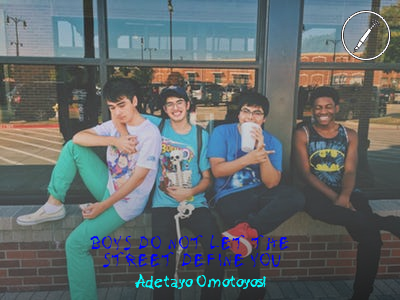 BOYS DO NOT LET THE STREET DEFINE YOU
In the heart of Computer Village, I see boys trading their future with drugs, alcohol and frivolities. Some of them do not have plans for their lives, their own is just to eat today and tomorrow as they say will take care of itself.
So last Friday I got talking with one of them, he boasted of how many girls he had dated and slept with in Computer Village, as if it were a competition. In my mind, I was like what is wrong with this one ?
Are you telling me that is your main focus in life ?? And is that the reason you came to Computer Village ?
Computer Village is such a place that you can easily get influenced by peers and groups. If you are not aware of the largest Computer market in Africa, then you should probably make out time to visit there. After the close hour is when, the 'Street Boys and Girls' take the centre stage. With fornications, smoke of Cigarettes, Igbo, Codeine, Alomo and so on renting the air like a balloon.
Majority of boys think for you to be called a Street inclined boys, you have to conform to the the popular belief held by majority of people.
The ordinary boy you find on the street smokes, drinks heavily and spends lavishly on women
Sometimes we let the street define who we are. I had a conversation with a boy last Friday, he clearly told me that Yahoo Yahoo is the next big thing he will do after completing his training in Computer Village. I shrugged him off, but later I got worried on why such a young boy is already contemplating Yahoo-Yahoo and what possibly could have informed his decision. I remembered vividly in one of JOHN OBIDI'S post on YAHOO-YAHOO. He made it succinctly clear that the fact that every other person is doing it and making money does not make it right. And that dumb excuse most gives that they are recovering the money taken away by whites from their Great-Grand Fathers and so on is not tenable.
Why should you make others cry by playing tricks to make them cough out their hard earned money ??
The way the guy was talking to me, he must have been planning to learn the stuff. In addition to that I also met a guy that left Lagos to Ibadan just to learn another aspect of YAHOO-YAHOO. All in the bid to scam people. Well the  most interesting thing about this whole drama is that most of them spend the money on cars, clothes and girls. Since they did not work hard for the money, they spend it recklessly. I know you might be saying they worked for it, but if you were in their shoes, can you boldly tell your family, can you come out in public to tell us what you do for a living ?
The Street is such that if you do not learn to master yourself and know who you are, what you represent. The street will define who you are for you, either consciously out of desperation or unconsciously out of dilemma and indecision. There are so many boys that never smoked before they got in there, but few months and years down the line they got lost in the razzmatazz. I still see boys that were on the street without owning a shop or store four years ago, they are still doing the same thing all over. They believe selling fake phones and snatching people's phones is the right way to make it big. But they were mistaken, that is not the right source. And when they get frustrated, they find comfort in the bossoms of drugs, drinks and women.
Just last week one of them were caught after collecting money from another boy who I think is also desperate to turn the money in his hands into double.
If you have ever been to the Awolowo section of Computer Village, you would have seen guys gathered together playing cards, that is where they initiate this scam.
They can also approach you on the road, that is another method.
Those boys collected the real money, up to N30,000 from him and gave him paper carefully arranged like real money. They had left before the young boy realised they gave him papers as money. As luck would have it, the next day the boy that was duped recognised one of the scammers, he immediately raised the alarm. The scammer was apprehended and taken to the police station. Computer Village is like a University, people come and go and that is why the Government deemed it fit to have a police post dedicated to the Affairs of the market.
Computer Village is a land that gives equal opportunities to every and any person, irrespective of your tribe, education, Religion or social status in life. If you know what you are doing, it is only a matter of time, your dreams will come through. Just like dreams come through here, crime is also on the increase.
What boys need to learn is the "Secret Of The Street." When you know these secrets then you can be sure to always be yourself and never let the Street define who you are. These secrets are not different from any other ladder successful people follow. For you to be successful, you must find a need and fulfil those needs.
To your success, I penned this.
#Boy-ChildAdvocate
#Boy-Childmovement

What Life Offers; Part 1 Of 3
Stories
3 days ago
Tears Of The Sons
Poetry
3 days ago
Cursed
Poetry
23 hours ago
Malaise Of Bestie
Stories
2 days ago
Previous Next