BEYOND WHAT YOU SEE

By Victor Adakole 18 months ago 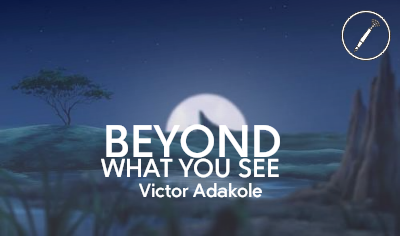 Ngozi just stood there, numb. She remembered that it took all the nerves she could muster to tell her mother that she was in love, and her man has proposed to her. Today, her world looks to be crashing before her eyes. She thought her mother would be sympathetic and give her some sort of support, but now she knew that that was not going to happen. The worse of it all was that, if she got this kind of reaction from her mother, her father would simply strangle her.

She was the first daughter of the family, and according to a tradition she couldn’t quite understand, she would only be allowed to marry someone from the same tribe as her – preferably from the same state too. She did not think much of this tradition as she figured that she would definitely marry her high school crush. She was so sure because Chinedu smiled and waved at her one day while she was on her way home from school. That image stuck. Even though they just remained friends, -- more because she did the occasional calling from time to time to “check up on him”, she somehow held the notion that one day, her dearest Chinedu would return from his trip to Lagos, and ask for her hand in marriage.

Fate had its own jokes on her however, because she was sent to Kano for youth service. She couldn’t speak the language; neither did she know what kind of food they eat. On her way, she sat beside a tall lanky Hausa guy. He noticed her uneasiness and started a conversation. Surprisingly, he was cool. He could hold a conversation and also chip in a few good jokes. In no time, she was relaxed, and began to ask more personal questions.

He was from Bauchi, working in Kano. His company sent him to Enugu on some assignment. He was the first of a family of 5 boys and 2 girls. His father is late, and his mother owns a primary school back in Bauchi. They were still talking when the toll of the journey overwhelmed her and she slept off, dreaming of darling Chinedu.

He tapped her to inform her that they have arrived. While she retrieved her bags, he waved her good bye and was on his way. Everything was different here; the dust was something else and the flies… she looked up just in time to see him leave. Just then, it occurred to her that this guy should be a guide around the city, so she called out to him and the journey began from there.

She actually settled in nicely after the three weeks camping. He helped her to a comfortable PPA and was always on hand to guide through the hurdles of a new city. And then surprisingly, Chinedu began to fade from her dreams and in came Tanko.

Standing in front of her dad, with her mom seated, she started explaining all over. Her dad simply crossed his legs, shaking and grumbling silent words. The stare he gave her had death written all over it. He didn’t even respond to her. It was at that moment she knew she was going to run away – family’s blessings or not. Tanko was worth it!