By Alex Lawless 17 months ago 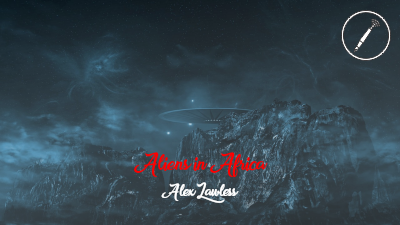 On the west coast of Africa, the southern part of Nigeria, a young boy had grown increasingly fascinated by the world and the beauty therein.

Every night during tales by moonlight, he would ask his father, "Papa,  who are we? Where did we come from? How did we get here? And where are the dragons you speak so fondly of night after night?"

Each time Nnamundo asked, his father repeatedly responded, " Son you're too young to have answers to these questions, but since you really want to know these things, I promise to tell on the night before your initiation into manhood."

From such a young age, the king began putting his son through all the task and skills he needed to gain passage into manhood.  He was taught to be a daring swordsman, a better horseman, a magnificent archer, lord of the spears and a conqueror. Under scorching suns,under winter storms, King Mutanda forced fear out of his soul through dark nights of combats in the woods. He always knew that the task ahead of his young and curious son required a high level of fearlessness.

Nnamundo constantly weathered the storm,fought through fear night after night. To the dismay of the king, the young boy never flinched,never got weary, showed up to trainings earlier than expected and never showed signs of failure.

"After eleven years of hard training, I can boast that our son is ready to showcase his skills to the world."

This he announced to the excitement of his elegant wife,Queen Arit, the last decendant of the lost city of Agatha and daughter of great king Ziza.

"Alas! the training, the pain and the trial have all passed in a blur, the gods of our ancestors be praised,have you told him yet?"

"Not yet my lady,I'll do that tomorrow on our hunting spree, I won't be quick to tell him everything, as I fear that he might get distracted from his first task if he knows everything already."

"I fear you might be right, I trust your judgement,handle it as it pleases you my king. On other matters, we've received word from over ten kings across the desert that they'll be here for the festivities, five others would be crossing the seas to witness the event,other empires and kingdoms far and near are sending representatives. king Jaja of Okpobo has also confirmed that he would not miss this year's initiation festivities for anything in the world.We've never had this much dignitaries in our initiations for decades."

While she was yet speaking, the king's countenance had changed, he seemed so worried and tensed. "They are here to mock us", he whispered. She held his hands and immediately rebuffed, "no my lord,on the contrary, they are here to see how our last son would fare, in hopes that he might be the one. If he's ready like you say he is,then there's absolutely nothing to be worried about."

After listening to her wise counsel,he smiled, "i would have been a sad old man if I'd obeyed my parent's advises not to marry you." They both erupted in laughter, "Nevertheless, I'll tell Nnamundo just enough to motivate him to be at his best for the initiation,you see to it that our guests are properly cartered for throughout their stay."

They parted ways that evening after several conversations, but the king couldn't find sleep at night. Once he heard the cock crow,he was off to the horse barn accompanied by his hunting partner, Nnamundo.

"In less than three days."  king Mutanda reported as they rode on, "You would get the chance to battle other teenagers for the title "Man" along with the lands, respect, and women that come with it, but aside the rounds of applause, and the loud chants of your heroics in the arena, if you emerge victorious, I'll give to you my blessings and name you the sole heir to the throne of Oro nation."

The young prince was thrilled by the plans of his father, but in reality what he longed for was knowledge of the things that fascinated his soul, especially answers to the questions he asked at age six, thoughts of what the king had revealed lingered on his mind throughout the day. This thoughts prompted him to pay the king a visit in his chamber on the eve of initiation, he had been taught never to visit a king empty handed, thus, he went with a keg of palm wine and some strong snuff.

"Father? Remember when you promised to tell me about the dragons and the world the night before I become a man?"

"Take a seat" the king invited as he took a sniffe of the snuff his son had offered. He poured for himself some wine, poured some to the floor as the custom is, after which he proceeded to offer praises and incantations to "Abasi Eyong ye Abasi Isong."

"540 million years ago, in an era known as Paleozoic and Mesozoic, the world is said to have been a supercontinent called Pangea, meaning that once upon a time, there was no Africa, no Asia, no North and South America, no Europe, no Artatica, no boundaries, no borders, no separations, no blacks nor whites just humans seeking direction and purpose in life."

Pangea was a supercontinent known for mass death and extinction of plants and animal species. The most  known  extinction remains that of the beautiful dinosaurs. Our people believe it was caused by a big rock of fire which fell from the sky, bringing with it  hell and a thick smoke that killed 90% of everything on earth including the dragons I speak so fondly of. The impact of the rock shook the foundation of our world  causing Pangea to break up in segments, resulting in the formation of several continents through the process of intercontinental drift."

"Should I pour you more wine?" Nnamundo offered. "Certainly" the king authorized as he continued his tale.

"A  holy book spoke of another mass extinction, many call it  Noah's deluge. It is said to have happened around 2348 BC. Contrary to the conspiracy that only a selected few survived the greatest flood in history, son? Our tribe, led  by your great grand father king Abang survived that flood.He even led his people boldly through the storms and cold nights in search of dry land,food and shelter from the elements, many men fell along the way, still he led the living across the deserts and the seven seas down to the west coast of an African sub-region he named Qua Iboe gulf line."

"At the time they arrived in 2360 BC, the flood had come to an end and Abang was crowned king and protector of the last men. His empire stretched from the Qua Iboe gulf line down to the Guinea Atlantic ocean. His empire was made up of nine clans known today as Oro Nations. This is who we are son,this is how we settled here, and a man that doesn't know his history isn't fit to be called a man. We are one of the oldest tribes in the world,with a reputation for grooming  brave and fearless men of war and valor, we have wealth, natural resources and the dialect of angels."

king Mutanda stood up and walked towards the fire place,he seemed afraid and preferred to gaze into the fire as though he'd seen something in it.

"At dawn" he grumbled, you my son would know exactly why our lands boost of the best warriors across the desert and seven seas. The gods know that i've trained you well, swear to me that you'll make me proud when morning comes."

"I will make you proud papa,I swear it on my life." He reassured with a scared but confident little voice, "but father, how exactly did our ancestors survive the great flood under harsh conditions?”

King Muntanda turned gently to look his son in the eye, walked up to him and placed his hands on his shoulders, "Your hunger for knowledge makes me wonder how inquisitive your mind can get,yet it is your quest for knowledge that makes me believe in you,I can't wait to step aside and watch you lead us back to greatness, yet! you can not know everything in a day, even Rome wasn't built in a day, besides, you need some sleep, a great task awaits you in the morning, someday, the knowledge you seek shall be made known to you,till then, goodnight son."