Aftermath Of The Coup (Episode One)

By John Michael 2 months ago 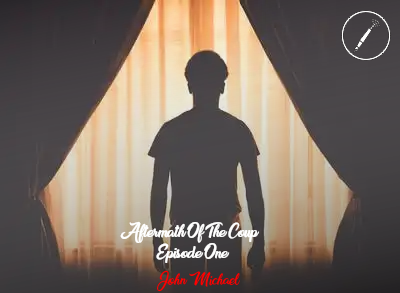 On that fateful day, at about 4:00 am, i was about starting my morning devotion when i heard a hard knock on my door. I was wondering why would someone knock on my door at that hour of the day. And soon, my mum's voice accompanied the knock.

'Ikemba', 'Ikemba', carry whatever you think is important to you and come out now, we are leaving this house immediately. She said. I had to end my devotion abruptly and open the door with immediate alacrity.

My son, we need to take the next available bus to the village, this place is no longer safe for us. 'Oya', start packing. She told me. I had to interrupt her because of the urgency of the movement. Mum, why the impromptu journey?

She sparked at me. 'Young man', shut up and pack. If i hear a word from you again, i will give you a dirty slap. I broke down in tears looking at the fact that she had never yelled at me like that before.

As i was about going to start packing, she also started crying and calling my dad's name. That was the moment i realised that something bad had happened.

'Chinedu,' 'Chinedu', Why did you chose to die like a dog? Why didn't you run for your life? She lamented.

Without been told, i already knew what had happened, though she had been trying to be strong but, she couldn't suppress the pain any longer. Nevertheless, i still summoned courage and asked her what had happened.

She was crying and explaining to me that Captain Dalyop called to inform her that Major general Aliyu Dan Maraya led a coup in the night and my dad alongside other Generals have been murdered. And at that moment, Dan Maraya's loyalist are on a rampage, killing families and relations of those generals. I was too shocked to cry because, Dan Maraya was one of my dad's closest friend.

'Oya', pack your things let's go. So, I picked my credentials and other important documents and few clothings. I led the way to the gate, unknown to us that the house has been surrounded by soldiers.

They had already broken in and when we saw them, we started running and they shot at us. A bullet hit my mum as she was running and she fell down. Lying in the pool of her own blood, she groaned, 'Ikemba', run. That was the last thing she managed to say before she died.