By Okechukwu Ukegbu 3 days ago 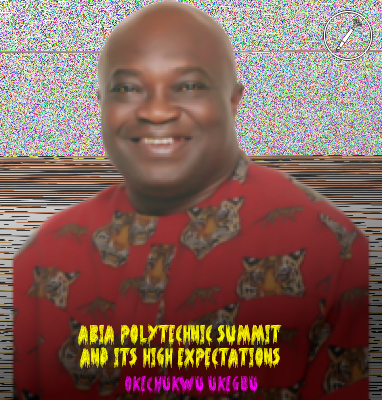 Abia Polytechnic mini summit and its high expectations
By Okechukwu Keshi Ukegbu
The public, especially the Abia State Polytechnic, Aba community are in high expectations that when the mini critical stakeholders summit recently proposed by Gov. Okezie Ikpeazu winds up, the crisis, especially that of staff salaries, bedeviling the institution would be over.
The governor has recently proposed a mini summit of critical stakeholders of the institution to address its problems.
It is a public knowledge, just like a full blown pregnancy that the institution has been recently harrassed by arrears of staff salaries. But interestingly, the summit is gooing to address other issues affecting the polytechnic outside the salaries issue. Part of it is the ambition to reposition the polytechnic to play a leading role in the production of next generation technologists equipped to drive innovations in the state in particular and the country in general.
The situation is aptly captured by the governor thus" We cannot afford to allow the bleeding at Abiapoly as the institution is the key to the realisation of our dream of leading the rest of the country in technological advancement as our forebears did with 'ikpu uzu'. It is therefore necessary for us to sit down and collectively  agree on a way forward that will ensure that staff, students and other stakeholders are happy to contribute their quota to realising the dreams that led to the setting up of the institution in the first place".
The 3-day summit will parade leaderships of the various academic unions both at the national and local levels, relevant government officials, including that of the ministry of education.
Indeed, the crisis at the polytechnic requires critical stakeholders to rub minds and proffer a way forward. The crisis is seemingly intractable and defies previous government interventions.
We thank the government that it is adopting this recent approach.
It will be recalled that the government also adopted another pragmatic approach last year to address the protracted salaries crisis in the institution.
The management of the institution in a bid to reposition the polytechnic for greater operational efficiency commenced the implementation of the review report on verification of staff and their certificates, which was approved by the state executive council in April last year. The exercise disengaged 258 staff from the services of the institution.
The institution,in a release signed by its Public Relations Officer, Chinyere Eze on behalf of the management noted :” following painstaking verification and reviews, letters have been issued to 258 staff members whose services are no longer required by the institution”.
The institution said that the ongoing reform is expected to position the institution to achieve its motto of “towards excellence in technology”, meet regular salary obligations of its workforce as well as create necessary environment for academic excellence that the institution is known for.
The exercise was apt. And there was no better and commendable approach for a polytechnic encumbered with a bloated workforce of 1250 workforce.Out of the 1250 staff , 900 were non- teaching staff while 350 were teaching staff, opposed to National Technical Board for Education (NBTE’s) recommended ratio of 3 teaching staff to 2 non-teaching staff.
This situation  saddled the institution with an astronomical monthly salary profile of over N160million.
The internally-generated revenue of the polytechnic  depleted drastically as a result of the decline in students enrollment- the mainstay of the institution’s IGR. The students enrollment declined to all time low of 12,000(upper limit) to 10,000(lower limit).
Also, with declined revenue situation from students fees   and subventions from the state government, the polytechnic was not able to sustain eight months salaries of staff, assuming staff salary payment was the only monetary need bothering the school.
In a bid to reduce cost and proffer a way of how the institution can navigate the muddy waters of salaries payment, staff verification exercise had to be conducted.
The grounds of verification bothered on those who had issues with their files, those who were about to retire, those found guilty of irregularities in their birth certificates and First School Leaving Certificates, and those with hanging disciplinary issue.
It is noteworthy that the state government had rescued the school from N2billion facilities which were hanging on the neck of the management of the institution like the sword of Damocles. The servicing of the facilities was also taking toll on the institution monthly.
Proffering a lasting solution to the protracted crisis in the institution is a 2-way  traffic. Members of the teaching staff should also contribute their bid to ensure that the school is totally pulled out from its salary logjam.
These efforts should manifest through an unresolved commitment of members of the teaching staff to disengage from other private teaching activities with other higher institutions within and outside Aba. This will enable the lecturers to concentrate more and give their best, thereby improving the dampened image of the school.
The staff unions also have a hand in the recuperation of the institution by desisting to call out their members for strike periodically, especially during admission periods. This has strongly hampered the enrollment strength of the school.

NIGERIA & THE STATE OF HER YOUTHS (The Scourge Of Their Unreal Fantasies) By Sunday Aienoben
Articles
18 months ago
To My Bully
Articles
12 months ago
Free Bitcoin
Articles
5 months ago
A Woman That Loves Me And A Woman I Love, Who Would I Choose?
Articles
4 months ago
THREE ASPECTS OF YOUR LIFE YOU SHOULD GAIN CONTROL OVER
Articles
7 months ago
Speak Up!
Articles
22 months ago