ALA: Woes Of A Mother

By Chisom Ugwu 4 weeks ago 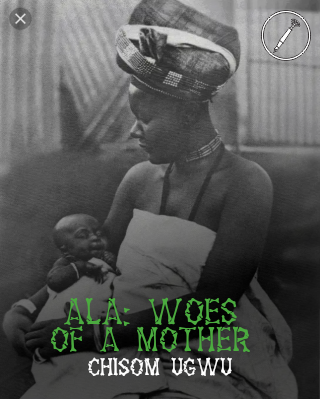 "Ogbanje!" Njideka shrieked. "Evil spirit! Just die!"
The sick child looked in fright at her screaming mother, her vision blurred due to the fever she was having.

Njideka struck the shivering child across the face, "I said you must die today you evil being!"
The child began to wail. Piercing screams tore out of her sore throat as her mother left painful red bruises on her fair skin.

After her assault on the child, Njideka locked her in a cold dark room and went to join her husband in his room.

Nnam cast his fuming wife a worried glance,
"Nnem, how is she?" he asked cautiously.

Nnam went back to chewing his tobacco. He understood his wife's anger, shared in her pain even. She was a broken woman who had lost three of her children to the Ogbanje spirits, and now that the new child was showing the same signs, Njideka had finally snapped.

Although the white foreigners had preached that there was no such thing as Ogbanje, Nnam and his wife had still discreetly spent a greater part of their wealth on divinations. They made expensive sacrifices weekly to appease the Ogbanje spirit to leave their household in peace.

Their search for its 'iyi ala' yielded no fruit, so they were stuck in a seemingly endless cycle of birthing and burying children.

By twilight, as the hens returned to roost, the sick child had passed on and it's spirit quickly journeyed to the nearest baobab tree.
The baobab tree served as the gate to the spirit world and was only accessible by gods and spirits.

Ala, the fertility goddess, cradled the child to her breasts to comfort it.
Her heart broke each time her children were treated badly and sent back to her too soon. Then the humans would have the gall to ask her for another.

Her hand stroked the grieving child's back in a gentle caress in an attempt to comfort it, but she only felt the many serrations it had been given while alive; the serrations humans believed would persuade the 'Ogbanje' to stay with them.
The reasoning was that its fellow 'Ogbanjes' would reject a scarred playmate.

Ala calmed the child and sent it off to play with its siblings who were all waiting to be given the chance to live.
She returned to her work table and continued moulding a pair of twins with her life-giving clay.

Strong masculine arms gently snaked around Ala's slender waist as she worked, pulling her into a well-sculpted chest.
Soft lips began to trace the side of her smooth neck before pausing all too soon.

"You're tense," her husband Amadioha observed, "What troubles you, my love?"

Ala sighed heavily, stepping out of her husband's arms to breathe life into the twins she had created.
They took their first breaths and blinked curiously up at their maker.

"Go and join your siblings," She said softly.
They obeyed, soon joining the happy chorus of laughter created by the children.

Ala turned to him.
"It is the humans," she complained. "The selfish and ungrateful humans I have created"

"What about them?" he took her soft hands in his before peering into her sad dark eyes.

"They treat my children with no love," Ala said. "They let them fall sick due to their lack of care, and rather than look for a cure, they fabricate stories of evil spirits and let my children die!"

"Ogbanje, Abiku, Eka-Abasi! They have given them many names and blame their problems on what they cannot see. Never ready to take the blame for their mistakes," golden tears spilled out of the goddess's eyes slowly.
"If they had cared more, maybe loved a bit more, then there would've been no reason for them to carve into my children with razors and knives like they were decorative calabashes."

Amadioha pulled his wife to him in a tight embrace, her tears stained his bare chest with golden streaks.
"Ebezina, do not cry, my love. The humans will learn in due time."

"But what if they don't? Will I continue to send them more children? Why do I have to witness my children go through the agony?" Ala sobbed.

Amadioha held her at arm's length, "Listen to me Ala. Humans are not perfect. You created them that way because Chukwu has instructed you to. But we are gods, we have a duty to the humans. So despite our personal pains, we have to maintain a balance. Keep sending them children, one day they will learn. But never forget that we answer to Chukwu and his will is law."

Ala knew Amadioha was right. As the goddess of fertility, she couldn't just stop sending the children - no matter how much their ill-treatment caused her heart-piercing agony.

It was her duty to serve for she was Ala (Or Ani) goddess of the earth, morality and fertility.
However, she would keep praying to Chukwu to change their ways.
It was all she could do.

That was why when Njideka and Nnam prayed to her for another child, she sent them the same child they had killed four times already.

It was not to taunt them, no, it was simply because the child was destined for them by Chukwu.

So when Njideka birthed the baby nine months later, her smile instantly falling off her face when she beheld the scars she had inflicted on it in its past life, the goddess Ala hid her face in her husband's chest once more as Njideka bashed the new baby on the floor screaming "Ogbanje! Ogbanjeeee!! Ogbanje has returned to my home!!!"

Scribbler's note: Brief explanation of the Ogbanje phenomenon: Ogbanje, the repeating children or changelings are children who die, usually very young, and return to be born and die again. They cause huge grief and sometimes anger to their parents. It is said that they have a connection to the spirit world called IYI ALA. Because of this connection, they are usually called back to that world. Different tribes know them by different names; Yoruba call them Abiku, Danwabi in Hausa, Eka-Abasi in Efik, Menji in Kalabari, Igbakhun in Efik etc. The story is based on the Igbo deities Ani (Or Ala) and her consort Amadioha only that I've added my own dash of imagination.

Comments would be appreciated.  What do you think?

What Life Offers; Part 1 Of 3
Stories
3 days ago
Tears Of The Sons
Poetry
3 days ago
Cursed
Poetry
23 hours ago
Malaise Of Bestie
Stories
2 days ago
Previous Next