A Day For The Barrack...

By Gabriel Agema 3 months ago 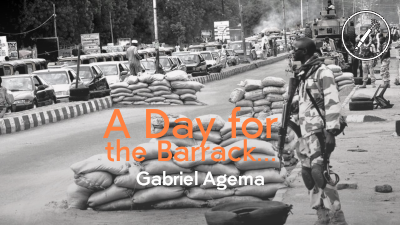 The insurgents were very daring. Always daring because no one had ever stopped them. Not even the famous super barracks could protect themselves from these miscreants who had attacked them twice, successfully. As usual, there was going to be an attack in the city and they did not want any disturbances, so they sent letters and also dropped one to the commandant of the barracks who was new. He was a former mobile police officer who joined the military police and later went mainstream into the army. He knew the records of the commandants before him were far better than his when it came to outfield combat and they had actually tried in protecting the barracks yet they let it fall to the insurgents twice. Everyone was aware that the insurgents had more fire power. They had rocket launchers, grenades, mortar rounds and even those machine guns with lots of chains of bullets. It was like the insurgents owned a weapons factory right there in the state! But the commandant knew he would not boast like the other two, he would not divulge any secrets and he had knew there would be spies among his men, people sympathetic to the cause of the insurgents; so he would play it safe. He read their letter and imagined how the other two commandants before him felt when they saw the letter. He had read the reports on the two encounters, now it was his turn. He was going to make sure the event turned out different this time. The insurgents had said in the letter that they would come to the barracks around 3:30pm on thursday. They were always late but ... read more