A DAY IN TIME

By Okolo Chinua 16 months ago 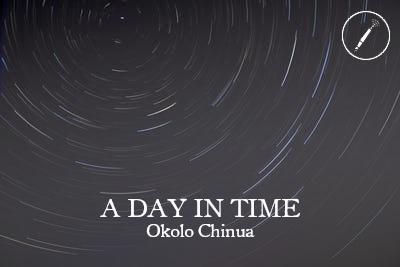 I awoke to a new surrounding. The last thing I could remember was going to my bed late at night the previous day with my phone in hand. Waking up that morning, I saw myself on a mat, the ceiling above was made of raffia and mud trickled down the sides of the building. I wasn't in my usual shorts but had a wrapper on, a wrapper I knew would reveal my adamic nature if removed.

I came out to see the world I was in. Alas, I discovered that I was in the house of Chukwuebuka. It was he who reminded me to get ready for farmwork for we were approaching the planting season. I got emotional and rushed inside, pretending to get my tools for work. I broke down in tears inside as I held my head against the wall. Chukwuebuka was my great grandfather and a great man who I had heard so much about. Was I to tell him that I wasn't actually Chukwuemeka his son who he had addressed me as, but Chinua, his later grandchild? Was I to tell him of what would befall him in the later years? I broke down in tears.

I went about the activities of the day and tried my best to say little. He kept complaining that I was being weird that day... If only he knew... We passed by a white man who was preaching on our way back. I began to think again, to wonder if it was okay to give my great grandfather information about the white man, to tell him that our village will one day be merged with distant villages to make one country named Nigeria? To tell him of the politics and the ways to have averted the tragedies...To tell him of the war which would take away all he had laboured for for years... to tell him this, to tell him that. I kept mute as the thoughts flooded my mind.

At night, my great grandmother spoke to me. She spoke to me like she knew I wasn't Chukwuemeka but Chinua. There was this smile on her lips, a smile which told many things, a smile that hid the sadness within. I kept her words with me as I drifted off to sleep that night.

And this morning, I awoke to my room, with my phone in hand, and my back on my bed.