A BETTER WAY TO MOURN

By OBADITAN OLUWAKOREDE 13 months ago 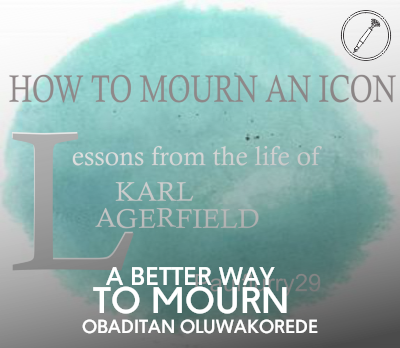 When the news broke that Style icon, designer extraordinaire ,multi –hyphenated , black and white donning  fashion designer had passed. The world did what it does in such moments – Mourn! And mourn all did.

From glowing tributes to superfluous media releases , everyone , from new to established figures in the fashion  industry and without , ascribed, described and Mourned notwithstanding a life which should have been celebrated , a man whose virtues should be emulated ,an icon whose days on the earth shouldn’t be deprecated by mourning rather  venerated by learning.

Karl lagerfield would not be forgotten in a rush not because of his personal style, or his persistent breathtaking creations for several top fashion houses from channel to Chloe , from Fendi to his ready to wear pieces for H&M . However remarkable and unforgettable those legacies are, karl taught the world a lesson many won’t learn in fashion school – a lesson on freedom.

Never, one to be constricted and restricted by “convention”. He wowed his audience and every single being that stumbled in /on his exhibitions. Unlike the signature colors of the clothes he was always seen in, his audience got to know that sometimes life isn’t just black or white, life comes in many more shades.

They had to learn this, when he moved his shows from the ‘conventional’ walk ways to supermarkets, beach fronts and the list is endless, karls love for detail is apparent in the unique designs his works testify – fresh and free of complications and  the duplications many of today’s fashion creations are.
Karl was indeed an iconoclast, his experience with love freely and truly expresses that, he was free enough to love and be in love with his partner, irrespective of their age difference, sexual preference in a time when such a relationship wasn’t one for the young, wild and free as it is now.
When it became public knowledge that the love of his life was no human, but a feline: a Cat, many were repulsed by such, others were amused, sadly the world failed to learn about freedom yet again. the freedom to love and be loved .

Interestingly in this ‘fad dominated’ world where many equate love to what is popular, what society wants, what society believes, what everyone is doing. Consequently anything other than “society’s convention” makes one a child of perdition- Karl didn’t care, less.
He taught the world but I doubt if the world was learning, learning that true art comes from the heart: a heart which does not segregate or separate, a heart which doesn’t stratify or classify - a heart that has indeed found freedom.


For the likes of Karl, they indeed never die, as death is for those who were never free from the shackles of tradition, religion and norm in this life- Karl didn’t just teach freedom, he Lived freely  and today history remembers him as the immortal KARL LAGER’FREE’.

CRYPTOCURRENCY : HERE TO STAY OR HERE TO PLAY
Articles
14 months ago
THE TOUGHEST NUT TO CRACK
Poetry
14 months ago
Previous Next